Plenty of things have happened this week! Not just in WoW, but many other things as well. I’ll likely take a look at E3 next week when I’ve got a bit more opportunity to digest and look at everything that’s been shown, but even without E3 I’ve got plenty to talk about this week, and nowhere near enough space to write it! I was going to make this post about the alpha dropping in WoW, but really you’re better off checking out Wowhead News or MMO-C for far more in-depth updates on what’s happening, as it happens.

Firstly, despite my best to try and avoid MOBAs until I get some kind of invite to Heroes of the Storm (as I know I’ll burnout of the genre once I do), I’ve been pulled back into Dota 2 as The International looms closer on July 18th-21st. In previous years, Valve has funded the total prize of $1.6m, with the grand prize being $1m, second place $250k, then the final $350k split between the remaining top 8 teams. Last year’s The International 3 (TI3) introduced the interactive compendium that detailed the events of The International and cataloged the progression of it, with 25% of the revenue made on it being added to Valve’s prize pool, making an outstanding $2,874,381 total prize pool – The International reclaimed its previous title as the largest prize pool in electronic sports history, exceeding the two million dollar prize pool from the League of Legends Season 2 World Championship.

… This year however for TI4, the compendium got re-introduced, with many more incentives for crowd-sourcing this time around and as of writing this article, today we saw the prize pool reach over $9.2m, with another 6 weeks until the finals themselves. Even if no more compendiums are purchased, the first prize would be over $5.75m if previous patterns follow… Brb rerolling pro-gamer. 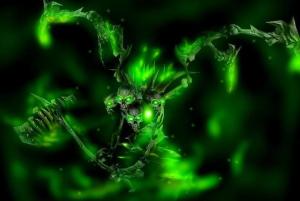 In terms of WoW, with another week of no trinket luck (one day, Immerseus… One day… And even you Dark Shamans) I’ve decided to get the alt itch in an entirely new class that I’ve never really alt’ed on a serious basis before. While I was going to go back to the nostalgia of TBC days and turn my Shaman back into Enhancement for the end of the expansion, I decided that I’d try and get my Warlock some green fire, before it turns into a Feat of Strength and I accidentally level him next expansion or something.

I logged in on him, and realised why he was one of my lesser played alts: Weapon was 450 iLvl until I gave him Garrosh’s heirloom staff, and his trinkets were 325 and 414 iLvls… Amongst other pieces of gear that was easily replaced by Timeless Isle pieces. Needless to say I have no idea what the heck happened there, but over the past week I’ve managed to sort out his gear, and although he’s still using a 419 ring and a 476 fail bag trinket from Mogu’shan, he’s now overall 506 iLvl with some luck from Celestial bosses and Ordos, alongside upgrading his trinket to the Isle of Thunder reputation reward. In that one item, his overall item level jumped from 487 up to 502, and I only wish I had more time to go through LFR this week on him to get some more.

Regardless, my plan for next week on him is to go for a round of SoO LFR to mop up any loot he can, and now I’ve gotten the book for the green fire quest, will begin on what I hear is one of the best solo experiences this game has to offer!