Fire! Metal! Lava! Rock! Brown! Orange! Reds! There’s a very distinctive theme to Blackrock Foundry that I’ve seen people complaining about recently. I’m confused as to what else they’d think a foundry would include, but the bosses I’m looking at in this second section do very well to see what else Blackhand has up his sleeve when supporting the Iron Horde’s conquest of this and other worlds/timelines. Here we’re looking at boats, trains and a petting zoo before going back to the big boss man of the foundry himself, Warlord Blackhand! It’s not as crazy a palette as you might find from Burning Crusade, but it mixes the pace up a bit from a factory creating fire-based weapons and armour.

Also, there will be spoilers toward the end of the post. You’ve been warned.

After extinguishing the Slagworks and shutting down the Black Forge, we now make our way into where all those weapons and armour were being created for, and step into the Iron Assembly. First stop: the Breaking Grounds where Beastlord Darmac of the Thunderlord clan resides to break, train and outfit the most savage beasts Draenor has to offer. The prime beasts under Darmac’s control are the wolf, rylak, elekk and (in mythic) clefthoof alongside some lesser pack animals such as talbuks, boars, ravagers and birds. Darmac has a unique synergy with the beasts he has under his control, where he will be able to take on their aspect when they fall.

Defeating Darmac will disable a powerful aspect of the Iron Horde and will aid in Thunderlord dissent against the Blackrock clan and the Iron Horde as a whole. Storywise he feels a little more filler where he doesn’t exactly fit the theme of the foundry, with the theme of beasts in a place of metal and fire. It feels as though he’d be more of a fit in the Tanaan raid and at least give Grommash a few more clans to support him against us.

This fight on a design standpoint is so much fun and quite interesting, I’d have to vote it as my favourite in the instance by far, which is just as well as the next fight is easily the most dragged out and boring fight in Blackrock Foundry. Either way, trains!

For whatever reason, I don’t know what makes him so special – if he’s the only one that knows how to use the controls in the Terminus or whatever, but the victory here seems very hollow: we don’t shut the Foundry Terminus down; we don’t destroy any trains themselves; we don’t physically stop the transport of any of the creations of Blackrock Foundry. What stops another member of the Iron Horde to step up to the plate? We find out that the trains are behind schedule with the intro to the next boss, but I just feel that we could set off iron stars into the Terminus before jumping into the Dread Grotto to make it a little more epic and meaningful.

The core feel of this fight feels very much like Madness of Deathwing, the end encounter of Dragon Soul back in Cataclysm. Firstly, you can choose which mechanics you can deal when the high movement phase of the fight occurs, and secondly because you have a very long easy phase of the fight (can be about 6-8mins of boredom) that leads to a huge ramp up in difficulty to quickly try and kill the bosses before they kill you.

Nevertheless, after making a few deliveries late by causing chaos in the Foundry Terminus, the raid will jump down into the Dread Grotto and face against Admiral Ga’ran of the Blackrock Clan and her trusted lieutenants, Marak the Blooded of the Bleeding Hollow and Enforcer Sorka of the Shattered Hand.

It’s interesting that Blizzard have allowed Blackhand to promote a female of his clan to such a prestigious position when back in the days of Warcraft I and Rise of the Horde, he even shuns his own daughter for just being female by forbidding her to drink the blood of Mannoroth and eventually ordering her death when she ran away with an ogre. It’s good to see that Blizzard have separated from their own stigma of sexism within their game, but at the sacrifice of the very core of Blackhand’s personality where he was ultimately a powerful yet not very bright orc clan leader that didn’t regard tactics and was more a figurehead for the real brains behind the operation: Gul’dan.

Killing Ga’ran and her lieutenants will halt the Iron Horde’s naval capabilities, not to mention with how many times we blow up the Dreadnaught we likely end up sinking one of the Iron Horde’s secret super-weapons. Given the remoteness of Tanaan Jungle to the rest of Draenor, cutting off any potential reinforcements from the sea will only help in our attempts to stop the Iron Horde.

We’re also here to recapture the Draenic Thaumiturgical Orb that was taken from a Draenei vessel to aid Khadgar in his fight against Gul’dan. It’s not entirely explained what it does, and the orcs don’t appear to be using it for anything either. We just know that it’s got a lot of power and it’s better in Khadgar’s hands than anyone else’s from our viewpoint. 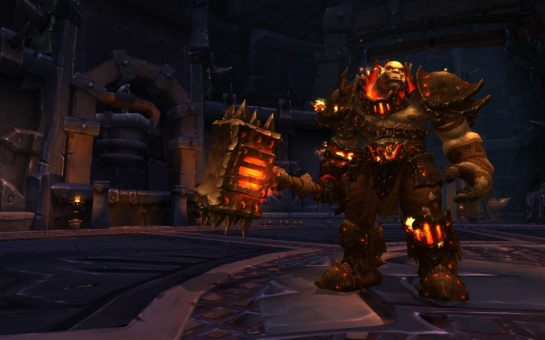 Finally, Warlord Blackhand himself. Leader of the Blackrock clan, one of the strongest clans within the Iron Horde is a fierce and ruthless warrior. He oversees the operations of the Blackrock Foundry and assists in creating the most powerful of weapons for use in the conquest of Draenor. When I first fought against Blackhand, I thought that Blizzard did a fantastic job to represent the orc in what we know of him in the previous games, while also adding the touch of flair when it comes to being the overseer of a massive, sweltering foundry.

He’s no caster nor a divine being, he has no Titan, Old God or Legion influence to augment his ability. He is simply an orc with a hammer, some machinery and an army, and wastes no time in showing what he can do with it. It certainly feels like a short fight for how end-tier bosses go, but the tuning is so tight even in heroic – let alone mythic – that he’s certainly going to be a fight to remember.

Defeating him spells a huge blow to the Iron Horde, and removing his arm and returning it to Khadgar makes him realise that the orcs are willing to sacrifice body parts to augment themselves within the fiery primal magics. Blackhand is regarded as second in power to only Grommash himself within the Iron Horde. In addition, the Blackrock clan was likely the strongest clan not only in terms of numbers but as the providers for the creation of armour, weapons and machinery.

We’ve significantly weakened the Iron Horde from this, and as we soon find out from the legendary ring questline, we have actually spent this entire first tier playing right into Gul’dan’s hands. We’ve systematically torn the Iron Horde apart. We freed Gul’dan and his lieutenants Cho’gall and Teron’gor when we first entered Draenor. We helped Thrall kill Garrosh, Gul’dan’s prime enemy within the Iron Horde. We dismantled the Shadowmoon clan by killing Ner’zhul, We assaulted Highmaul at the same time as Cho’gall and ended up killing the leader of the Shattered Hand, Kargath Bladefist. We’ve stormed through Blackrock Foundry and killed Blackhand. Azuka Bladefury was introduced as an excellent potential villain, but was eventually killed near the border of Tanaan Jungle, with her plans of controlling the magnaron for the Iron Horde dying with her.

The Iron Horde has all but collapsed around Grommash, and I’m surprised that he still doesn’t take the pit lord blood knowing what he was like in the main universe (drinking Mannoroth’s blood a second time when confronted by Cenarius and the night elves, knowing full well what the blood curse does). However, Gul’dan is now at the head of the Iron Horde, similar to how events occurred in the main timeline, just with Kilrogg Deadeye as his puppet instead of Blackhand. I’m interested to see what happens in the next patch or two, to see what happens between Gul’dan and Khadgar, and what ultimately happens to the Iron Horde.