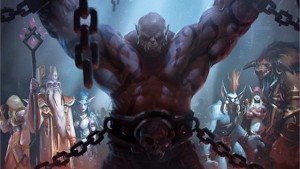 I’ll admit, I’m not feeling the drive to play WoW anywhere near as much as I have been, and with Warlords of Draenor on the horizon, I think I can safely say I’m in pre-expansion blues. I know that since I picked the blog back up a few weeks back it’s not entirely had the best WoW-focus anyway, but still I feel the pull loosening and loosening. Last expansion’s blues was filled with me trying to grab as many achievements as I could, trying to gear up alts through Dragon Soul raid finder, and progress through normal and heroic DS on those alts. We even set up a Horde counterpart guild so that we couldn’t be boosted by an assortment of differently geared mains and alts. With more hours at work taking me away from any kind of regular raiding schedule with the friends I’ve already made online (and they themselves finding less incentive to be ingame) I just feel that Mists is… Done. For me, anyway.

War Crimes came out earlier last week, and that’s largely cemented my feelings towards the gap between Mists and Warlords. I feel like I’ve finished my part in the expansion, even with 3 heroic bosses still to kill. I enjoy raiding, and I’m sure as hell going to still give it my all to my guild when we are making attempts on Blackfuse, but if we hang up the towel I likely won’t have sorrow that I didn’t complete the final bosses this expansion has to offer. The Cutting Edge achievement will completely be out of my grasp but I’m sure I’ll be able to pick up the boss kill achievements at a later date. I’ve got my staff heirloom from normal, and I can’t imagine having the heroic one to be THAT much of a difference while levelling, and I’m sure I’ll have as much motivation to get the mount as I do Invincible or Mimiron’s Head.

Looking back even further from last expansion’s blues, and in the twilight of Wrath days, I remembered I was looking at other MMO’s to play. Rift was in beta at the time, and I checked it out. I can’t exactly remember much of what I experienced back then, as I was hopping to and from games like anything back then too, but I decided that with this apparent new patch massively improving the game that I’d check it out again. It’s free to play now after all, so what’s the harm? Of course, I don’t know what this new patch brought, or how it would have improved the game at all – I even struggle to remember what I played back then: I’d just started trying out Balance Druid for the first time in WoW, so when I heard that Druids were a DPS spec of Clerics I wanted to try that out. I also had some kind of Rogue tank on the other faction, so I tried to fire it up and join a friend who I noticed pop up on my Steam profile… Only to find out I was spammed with an authentication error whenever I tried to log in.

Oh well. Moving on, I still downloaded the update and decided to play as a guest for a while and ended up creating a new account irregardless. I have to say, I was fairly impressed with the changes to the game in the past two or three years. I wouldn’t say it’s a Reaper of Souls kind of improvement, but it certainly feels much more of a solid game, and has cycled into the free-to-play model pretty well, though I only say this as someone that’s spent roughly 2 hours or so in the past week and hasn’t seen anything much past level 10. From what I could tell from a brief look at the Rift Store, you could buy things such as mounts, companion pets, experience boosts, faction changes… Things that sounded a little familiar, and I contemplated what WoW could look like with this monetary model.

Upon looking deeper into it however, there were other things that you could purchase with real currency. Trion have a subscription model that you can purchase if you wish, that would grant bonuses such as bonus currency (both gold/platinum as well as dungeon or crafting currencies); bonus experience boosts; instant access to banks/trainers; bonuses to reputation/notoriety; discounts in the store; queue hopping to get onto servers, or shards as they’re known in Rift; loyalty bonuses for keeping subscribed for long periods of time, and more. When I looked at the subscriber bonuses, I quickly came to the conclusion that Blizzard could probably not get away with turning their subscription model to something similar to Rift. I can only imagine the outburst on the forums where people would feel “forced” to stay subscribed in order to stay competitive.

At the end of the day, they’ll be the vocal minority and the pricing structure probably won’t be more expensive to what we’re paying each month now. However, because the free-to-play option is available, QQ will definitely ensue for people feeling that they’ll be nerfed in comparison to subscribers and have to pay Blizz in order to stay in heroic or mythic raiding. Personally, I’m happy staying free-to-play in Rift, just as I’m trying my best to keep real money out of Hearthstone, and if I ever get into Heroes of the Storm I’ll hopefully just be earning the gold and spending that ingame. The latter will depend on how quickly gold can be earned post-40 and when new heroes come out that I find out I want to play, but for now I’ll grind to 10k gold and get my Abathur and be happy. With my desire to main Abathur, I have no real need to buy mounts anyway, and unless I falter and end up buying Pajamathur, I won’t actually see much of my hero in any case in a standard match, so there’s not much need to buy skins on Abathur in my opinion. 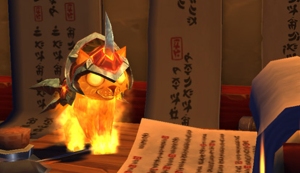 While I’m very late on the bandwagon when the WoW blogging community exploded with the news of not just the cosmetic helmets being sold through the BlizzStore, but more recently with the news of experience potions and bags of Lesser Charms potentially being sold to the Eastern clients.

Now I’ll admit to buying both mounts as well as pets through the BlizzStore, even if I don’t use or see them all that often – some of them are still absolutely fantastic models and I haven’t regretted a single purchase I’ve made through the store. Even the troll in me still enjoys mounting up on the Celestial Steed from time to time, though these days it’s more “Where did you get that mount from?” instead of “LOL wasted money on TRH”.

So why am I yet to purchase the helmets? They’re clearly very popular, but seemingly many people have taken a strong disliking to anyone that has purchased it. I’ve even been in LFR’s where people were outright removed when the helmets first came out. We have a fantastic WW Monk in OMFG – one of the best players I’ve raided with – that uses the Firelord’s horns, so there are as always exceptions to the rule. But what makes the helmets so despised whereas the mounts and pets slide by freely?

Now I’m not saying that everyone buys the pets and mounts, because there are those that haven’t and will not buy anything from a game they already have to pay a monthly subscription for – after all that’s what pay to win games’ strategies are. But I’m in the mindset that I’m paying the exact same subscription as I was nearly a decade ago, so taking inflation into account, it’s no wonder that Blizzard might be seeking other options to get more cash from their subscribers. And it works very well – especially pets such as the Cinder Kitten that on release have a certain percentage go to a good cause.

Personally, for the cost of the helmets, I would have expected perhaps a full set instead of having to find armor to go with it. But they have been successful, and they do indeed look very good, but I hope it’s not going to be a recurring trend, to ask for that much money for one slot of transmog. Perhaps Blizzard are toying around with different ideas for their F2P model for TITAN and are working out just how many people would buy what on the Blizzard Store. And this is before even thinking about what could become of the experience potion and the Lesser Charm bags.

What do you guys think? Have you bought anything from the BlizzStore? Would you, if it were cheaper? And if you have bought things from there, what would be you personal limit?