PAX East has come and gone, and on Blizzard’s return back to HQ we get a new hero week! This time it’s on one of the new heroes showcased, the Faerie Dragon Brightwing! This playful bundle of joy that appears to believe our insides taste of berries is a ranged support hero with global presence on the battlefield. Brightwing is one of the few non-hero heroes that we get to play as in Heroes, so there’s not much lore on Brightwing herself, but Blizzard felt that the playstyle of a faerie dragon would fit well into Heroes.

Personally, I’m all for these non-hero heroes, especially if there isn’t an existing hero that has the skillset that would be fun to play with in the game. Whether or not they get in before big names such as Thrall, Maltheal or Mengsk isn’t any worry to me, as I do want Heroes of the Storm to still have heroes to look forward to playing over the months or years that I’ll end up playing this game for. I don’t mean that I can wait 3 years before Thrall finally gets introduced, but similarly I don’t want all the big names to be in the game in the first year.

Nevertheless, and back on topic of Brightwing, Faerie Dragons are a product of the Warcraft universe, and have been popular creatures of Night Elven/Emerald Dream areas since Warcraft III: The Frozen Throne, when Malfurion summoned them from the Emerald Dream to heal the forests of Kalimdor from demonic taint, following the second Legion invasion. Looking like a cross between a chameleon and a butterfly, they usually seem playful and childlike, while having that sinister side of actually wanting to eat you. She doesn’t have the spell immunity that’s classic from WCIII’s Faerie Dragons, there are still other inspirations drawn from the unit in the RTS.

Please note that at the time of writing this article, Heroes of the Storm is in technical alpha, and I’m not in the alpha to be able to check live updates, so chances are that some of the numbers may have been tweaked and are yet to be updated on online sources. 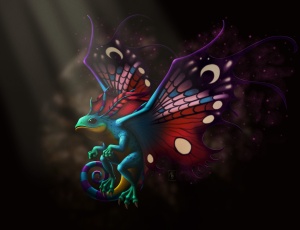 A trait that passively heals allies every 4 seconds, though at the moment from tooltips it seems that this doesn’t scale with level, so the trait may become less useful as the game goes on. I guess by then you have heroic abilities and talents to make up for it, it would still be nice to have a trait that scales well as the game progresses. The only upgrades for Soothing Mist is at level 7, and they compete with Calldown: MULE and Cleanse. Because of the lack of spam you can do with Brightwing’s abilities, I’m leaning more toward Gust of Healing than Regenerative Rains, unless Blink Heal activates the trait talent on each blink, in which case it might be more worth it. Overall, others may have the MULE on your team, so it’s a choice between Gust of Healing or Cleanse, depending on if the enemy team has a lot of disables or you need that burst healing.

Arcane Flare is a distant cousin from Warcraft III’s Mana Flare, with its only similarity being in ability icon, however with the theme for Brightwing and her iconic abilities coming up later, Blizzard had to have a standard nuke for her to use. I don’t know the damage of the inner circle, but I’m going to assume it’s more

Depending on how you build her, you may opt for the level 1 talent for the damage nukes, however with Bribe or even the Path of the Wizard on the same tier it might be preferable, especially in late game, to go for those other choices. Sticky Flare might be a useful talent to help snare enemies, especially clumped up, to stop them from escaping or avoiding attacks, especially if you have a much harder support in your team such as a Malfurion or support-specced Uther so you can miss out on Ice Block or Phase Shield easily.

I have to admit, I didn’t realise that this ability had a bit of damage to go alongside it, but it certainly helps the low damage Brightwing brings to the table. In the PAX match, Polymorph was also usable on enemies such as the Dragon Knight, so I imagine that you can use it on the golem in Haunted Mines as well, to help buy you those precious seconds that could domino into a win. Besides that, it’s an amusing ability to turn Blizzard’s greatest heroes into a harmless pig or squirrel for a couple of seconds.

The talents all come at level 16, with Rewind and Stoneskin in the same tier. Personally I prefer Critterize, especially if you’re on comms with team mates and let them know that a specific target will be taking more damage soon, so nuke the hell out of them, though the extra survivability from Stoneskin, or being able to spam more with Rewind (most of Brightwings basic abilities are short-mid CDs anyway) might be needed more in your match, but the 50% snare for 2 seconds doesn’t seem that great in comparison to the rest of the tier – they’re already pacified anyway, it just means they can’t run away. It might be the better option when you’re not on comms as it allows team mates to react better.

[E] Pixie Dust: Increases move speed by 25% and blocks up to 2 Hero Basic Attacks, reducing their damage by 50%. Lasts for 4 seconds.

More utility for the support hero is always good, and being able to help allies (or yourself) escape if things don’t go to plan is a good bonus to have. It can also be used as a good initiator for your Warrior to run in quickly from the bushes and tank up some right click damage even better than they normally would. It’s a rebalanced version of WCIII’s Phase Shift, in my opinion – instead of making her outright immune, she takes reduced damage, but the trade-off is being able to cast it on anyone and also have increased movement speed. Puck manages to get away with it in Dota however, but it’s good to see Heroes mixing it up a bit (just imagine the QQ otherwise). It’s also useful to use on something like a Zeratul or Illidan to get them to catch up to fleeing foes.

Both of Pixie Dust’s potential upgrades come early into the matches, with the level 1 upgrade looking a little lackluster in comparison to its rivals in the tier (explained earlier with Arcane Flare). Anti-magic Powder however looks to be a solid choice at level 4, especially if you have hard nukers on the other team. If there are heroes that are “death by a thousand cuts”, then Shield Ally may work out best, though with so many supports sharing this talent, it may be best to communicate which is the better build to go for.

[R] Emerald Wind: Creates an expanding nova of wind, dealing 100 damage to enemies and pushing them away from the center.

Two very good heroic abilities await Brightwing at level 10. The first of which is Emerald Wind, that can be used positionally to either knock enemies away from your squishy ranged assassins… Or you can sneak ahead and knock them back into your team! I don’t know if you can knock enemies behind your walls, or if they just smash their faces into them, but it might be a good trick to add to her repertoire, similar to how Stitches can kidnap an enemy and drop them under a fort or behind a gate.

Choosing between the Continuous Winds upgrade or getting Storm Shield or Bolt of the Storm is a bit tricky to say up front, however I think it depends more on the playstyle you want for Brightwing. Storm Shield is already available to many supports, and provides a decent substitute for missing out on Blink Heal beforehand; Bolt of the Storm allows you to be even more elusive, and can help with setting up that positional requirement to get enemies into your team’s grasp; and Continuous Winds provides a good buffer, especially against melee heroes, to give those few extra seconds of freedom.

[R] Blink Heal: For 10 seconds you may teleport to nearby allies by right clicking on them, healing them instantly, and another 672 (102 + 30 per level) over 3 seconds.

While I don’t know the initial healing numbers, this is a great ability nonetheless. Making Brightwing more elusive and giving her a harder support role is great for her overall. I don’t know the cooldown for each individual blink, but as you can see in the video above, you can fit quite a few heals into that 10sec gap. In teamfights, which Heroes seems to revolve around in a much larger way than other games in the genre, this is a great competitor against Emerald Wind’s raw utility. Again, and I know you must be sick of hearing this, but it really depends on who you team up with and who you’re against as to which choice is better.

At level 20, you get a choice on a massive increase in the heal from your heroic ability, or the choice mentioned before of the teleport or shield.  It depends on how much Blink Heal actually heals for anyway, but I can see this being the best upgrade in the tier. Bolt isn’t as required as you gain a fair few teleports with the heroic, and you don’t have any positional requirements as such without Emerald Wind, though the Storm Shield may be much more beneficial to shield up before Blink Healing everywhere. It really depends on what the match needs from you as a Brightwing. 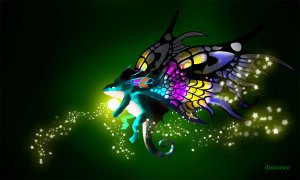 [Z] Phase Shift: Instead of mounting, Brightwing can teleport to an ally hero.

I thought that this would be a good thing to mention, especially with the talent upgrade. Unlike the previous heroes I’ve spotlighted, faerie dragons such as Brightwing don’t really have the anatomy to ride mounts. Blizzard have thought about this, and the way Brightwing moves quickly across the map is by teleporting to ally heroes. Significantly better than her old datamined version, that just allowed her to fly over terrain to get to where you needed to go, it still doesn’t in my opinion equal to Abathur or Falstad’s modes of transport. Then again, why should it be equal? Brightwing’s role is to support, and she’s not likely to run from combat! Similarly, the upgrade certainly helps her in supporting her allies, so if you want to go for the full support this is easily the best option in the tier, otherwise all four options at level 13 are attractive – either the Sprint, the Ice Block or Sticky Flare can all be used on a match-per-match basis. 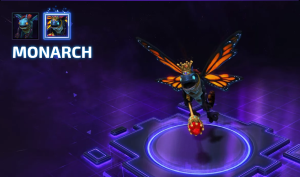 Brightwing already has a skin available to her, and while it’s just the one it is one that I do like. The Monarch skin changes her wings to be similar to a monarch butterfly, and then Blizzard takes the pun and gives her a royal crown and scepter to represent royalty and monarchy. It’s not a huge overhaul of the skin to where new players have to double take to see who the hero really is (Zeratul’s Ronin set confused me a while back before I realised the abilities he was casting) but it’s certainly distinctive and different to her base skin.

That just about wraps up Brightwing week from me at OMFG Soup, in other Heroes news a new patch was implemented alongside Li Li and Brightwing’s introduction to the alpha. Without being in the alpha, I don’t feel like I’m in the best position to be able to talk about them all in detail, though you can check out the notes here!