I was listening to Azortharion on his recent interview with Finalbosstv and talking about the Survival changes in the latest Legion alpha build, and while I was getting distracted by other things around me, many of the changes discussed made me speculate on possible tank playstyle if Blizzard decided to go down that route after Legion.

I mean, it makes sense right? Players have been asking for the pure DPS classes to branch out into hybrid roles for years, and although Beast Mastery has always been the go-to as the suggestion for Hunters’ tank specialisation, with Survival going melee, it seems like a good transition. After all, what are tanks for if not being as survivable as possible?

Personally, I don’t agree with Blizzard’s stance on adding new DPS specialisations as melee only. If you’ve been a die-hard Horde fan from the start of WoW, you were introduced to:

The Alliance may have gained Elemental Shamans in TBC, but outside of class revamps that make the specs feel completely different, we haven’t had any fresh blood of ranged DPS to fill our raids in WoW. Blizzard are getting better with making mechanics more melee friendly, but at the end of the day you’re usually going to have more ranged DPS than melee in a raiding environment. By the time Legion hits, we’ll be seeing 13 melee DPS specs up against 11 ranged DPS. The bloat for melee is real, and we don’t need to be adding to that roster any more.

Having said that, I do realise that the tanking role is even tighter than melee, and with six specs to fill two raid spots we’re definitely not going to see every tank specialisation represented in raids. It could definitely be argued that, of anything, we shouldn’t be getting more tank roles. My argument for is that each tank, while homogenised to the extent that they can all perform well at high level, each tank does have its own niche and playstyle to make them different enough to see balanced play. In addition, it’s always fun to see the World Race to see which tanks are in the meta – such as when double Monk was a thing for Blackhand mythic.

Druids are big slabs of meat that have high health pools (and have more healing taken); DKs are masters of cooldowns with a button to press for every large magic or physical damage spike; Monks focus on dodging enemy attacks and staggering hits to be taken over the following few seconds; Warriors are block kings, focusing many of their attacks and defenses on the slab of wood and metal on their left arm; Paladins are as close as you’re going to get to a rotation-based tank with their active mitigation being very reliable and helps with damage smoothing. Vengeance Demon Hunters look to be mobile, parrying fiends that simply have flat damage reduction and pure healing and are insane at AoE threat, so where would that leave Survival if it became a tanking role?

As one of the Hunters specs to still keep their pets, I think it would be interesting to see Survival Hunters have a hybrid between agile dodges and parries, while also allowing their pets to take some of the damage for them. It would involve heavy changes to their talents as a result as I believe there’s only two talents, Animal Instincts and Aspect of the Beast, that actually affects what your pets do, though there are many damage-oriented talents that can be switched out for more defensive capabilities.

Playstyle would likely involve the Hunter being in charge of keeping his pet alive, or to have healing and damage be shared between them and their pet, to avoid having to train healers how to heal pets. They could have a lower natural health pool, but offset by the fact that they have two health pools in themselves and the pet.

Other than getting a base threat increase regardless, Raptor Strike would have to change into either a free ability or focus generator, and change Mongoose Strike to be the focus spender with each stack reducing damage taken by more and more per stack. Traps could be reworked so that a debuff is placed on affected targets to increase your dodge chance against them.

There’s already cooldowns in Aspect of the Turtle and Exhilaration, and Survival’s Mastery alongside Aspect of the Eagle under what I propose for Mongoose Strike are also viable defensive cooldowns. Finally, I’d suggest Flanking Strike could become the low cooldown defensive at 60-90sec cooldown, to allow you pet to “take a hit” for you. 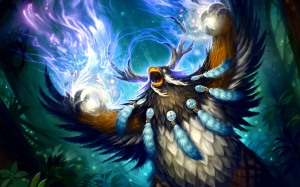 One of the larger draws in my opinion for Survival to become a tanking spec would be that if the fight calls for a single tank or if you have a flexible roster in your raiding team, the offspec would give a potential ranged DPS – something we only see with Guardian Druids currently (assuming they have a viable Balance offspec, but at least they have the ability to do so). In addition, it opens up the class to being more than just a pure damage dealer, and although in Legion they now get the opportunity to switch it up between melee, ranged with pet or ranged without pet, it’s something that’s always driven me away from Mage, Warlock, Rogue and Hunter in that it’s all they can do.