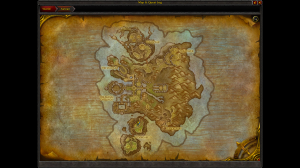 … and why I think Ashran will help with this!

Back when I used to recruit for and lead a raid team, I will admit one of my vices was to prefer players that had experienced both PvP and PvE. If that wasn’t the case with new applicants, I’d be more than happy to take them in 2’s or in BGs to get them that kind of experience if they wanted it – it’s partly how I managed to get nearly twice as much guild participation as the person in second place. I felt back at the time that if raiders could get used to unscripted events that often happen in PvP, they’d be much more likely able to react to when things don’t go too smoothly in raids and some people didn’t follow tactics perfectly and having to make up for that mess up.

Since me stepping down from raid/guild leadership and having been in new guilds with different leadership styles since, I’ve seen plenty of cases where I’ve been proven right or wrong. The best Windwalker Monk I’ve ever known, and definitely one of the best raiders I’ve had the pleasure of raiding with in the past 10 years, has barely set foot in PvP whatsoever – he doesn’t even hold 10k HKs to a single character. In my current guild, there are certainly people there that are excellent at following what boss mods tell them to. Some people do however panic once something goes awry and find it difficult to recapture the situation. If it’s just the nature of the later bosses in Siege to be difficult to pull back the slightest of situations, I don’t know, as I haven’t done the later bosses with anyone other than my current guild. But I do still feel like if they had a bit more PvP experience (as far as I know, most of them have pretty limited exp on that front) that there’d be a bit more initiative to survive easier. I have on the other hand seen one or two people who focus primarily on PvP being brought in to raid, and failing either in terms of performance output or just generally not following tactics and causing one-shot wipes. So there are certainly boots for both feet, for sure.

Regardless, we found out from the Warlords release date event this week that Ashran would have mechanics in place that you collect a currency while fighting or completing objectives – including whenever you kill an enemy, you can loot half of their Ashran currency! I don’t know how that’ll work out for groups of gankers in terms of who gets the loot, but it certainly brings a bit more of a disincentive to die other than being set back up to 30secs and placed in the wrong side of the map to prevent immediate combat re-entry.

You see, one of the main reasons why I tried to push for PvP is to try and get people to use all of their toolkit, bits that they wouldn’t ordinarily use in a raid setting, and I also saw on logs that one of the leading reasons why people died or took too much damage is because they weren’t using their defensives effectively, if at all. I will admit that after missing two seasons of PvP that I’ve gone back into bad habits and forgetting I have abilities such as using Cenarion Ward preemptively to quickly gain health after a big damage nuke comes in, or keeping an eye on healers mana to innervate them early to be able to cast it again later in the fight, or even just using a quick NS+HT on people at low health. Admittedly at this stage our healers have so much regen that it’s mainly GCDs that kill people off if it’s not one-shot mechanics (or silly DPS getting crit streaks on the pull and dying to threat), so the latter example there would likely end up being overhealing for either myself or the healers, and I lose the ability to instant res for a minute, but it’s still areas that I know I’m slacking on from my break in PvP.

Ashran also provides a great outlet to just smack some faces around. With the new faction hubs being on the outskirts of the zone (with stronger guards than what we currently see in Mists’ Shrines) it allows people to not only have easy access to world PvP, but also to have a safe refuge when you’ve had enough or have realised that the opposing faction is dunking you hard. As much as I dislike mixing PvP and PvE content together, I would love to see Ashran as one of the ways you can earn bonus rolls in raids. It’s no secret I have a large dislike for dailies, so I’m glad that won’t be one of the methods of gaining these bonus rolls (other than the weekly quest chains, but seeing as it’s reminiscent of 5.1’s dailies, I’ll let that one pass).

I guess my view back in the day was largely jaded because of the ease that the top guilds on our server also happened to have the best of the PVPers too, and even when there was a PVP focused guild that managed to snatch many multi-glads as well as gain Grand Marshal ranks they managed to clear the hardest raiding content in a matter of a scant few weeks of first setting foot in the raid altogether. There are certainly exceptions to the rule as I outlined above, and I certainly won’t hearken that I’m an excellent player in either PvP or PvE, but I will certainly argue the fact that in order to play better with people, it’s good to play against them to really see how people react in different ways to different situations, or to certainly find out better ways to increase their own life expectancy. With Ashran and arena skirmishes being very easy ways to get into PvP next expansion, it’ll be a much better time than any to dip your foot into it… As long as class balance isn’t as terrible as it has been at the end of Mists.

I’ve certainly learned that the best way for me to increase my life expectancy in raids these days is to constantly yell out for MD’s, Tricks and Hand of Salvs so that I don’t pull threat mid-cooldowns.