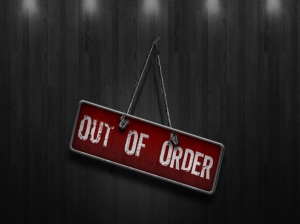 This week at work, we had a few days where one of our two entrance doors were out of order. The sensor on it was faulty, and it led to the door being temperamental as to whether or not it would detect if people were nearby to automatically open. So we switched the electronics in the door off, and put up a sign apologising to customers that the door was out of use, and to ask them to use the other door, barely two paces away. The miniature social experiment I observed afterwards when I had a few slow starts in the morning, or in the evening was quite interesting. While I didn’t collect any data or anything like that, it was still amusing to see the results that followed:

I’m pretty sure there were other anecdotes surrounding the broken door for when I wasn’t working the till, but overall I had to laugh at the amount of different reactions to the broken door, but more importantly how many people ignored the sign that was stuck onto the door explaining the situation. It then got me thinking possible reasons why the sign was ignored – as I said I don’t have official data to back this up, and I didn’t ask any of the customers why they didn’t notice the sign, so it’s all speculation purely on my behalf.

Some people may have been distracted in their thoughts, just purely not looking at what’s on the door, and just expecting it to be a door that opens for them. After all, that’s what automatic doors are supposed to do, especially when they’ve worked that way for many years and all of a sudden it just doesn’t. However, the main conclusion I came to is that we have a lot of information already on our doors that’s only really applicable to a small percentage of the time. We have signs stuck on the doors explaining our opening times, what services we provide in-store, what cards we process, signs to tell customers that we do have an online store that does deliveries to the customers’ homes, and even some others that I can’t remember right now. While we thought that a sign in a colour scheme that didn’t match the overall theme of those other signs, as well as a big, red CAUTION at the top of the sign would get people to take notice, I was still surprised at the amount of people that didn’t acknowledge it. To them, it was likely just another sign on the door that most likely wouldn’t have affected them as they went for their fortnightly shop in our store. 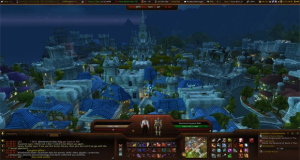 So what does this little real life anecdote have to do with anything in terms of gaming? Not an awful lot, but considering I’ve spent pretty much no time this week in games, I thought I’d try to link something up between the two. I got to thinking about UIs and the amount of information they can present in games, how some UIs can just be full of pretty looking fluff that is there to please the eye (as pictured above – after all, why not if you’re going to be looking at it for multiple hours per day). Some are just clogged up with information in that you may as well be playing a text-based game. Some can be minimalistic so that only the important information is right where you need it.

It all comes down to personal taste and how you can process the information on your screen: If you feel like being an air traffic controller while you game, then go and give yourself a ton of information to process; if you don’t want to just be presented with a whole load of boxes displaying information, go and download kgPanels to make your life on WoW a little easier on the eye; if you know your keybindings through and through, and have a good sense for your class and the game, go for the minimalist approach and just have what’s important at that time for you. I’m personally the first kind of player – for those that have seen my UI in one of my earlier posts everything’s kind of… There. Since my burnout of WoW, the UI’s only gotten more deprecated, though I have scaled the ability buttons down and moved a few things around here and there from when I was raiding on Nagrand. It’s very messy, I’m well aware of it, but it’s what I’ve gotten used to and I’m pretty sure I’d be lost going for a different approach. I could cut it down to the minimalist UI like the one below, but as I’m an altoholic, I’d be lost having one UI for my Druid(s) and knowing the exact keybindings etc for them, but then on alts I’d forever be wondering what button does what. 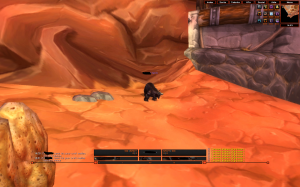 However, I know my faults when it does come to me and my UI – adding new things to it. I’m so used to how my UI looks 95% of the time, that when I add a new WeakAura for a specific boss fight, I have to add a sound or make my character say something so that I actually do notice it. I know it took me more attempts than I’d like (as in, not fixing the problem straight away after the first fail) on Malkorok heroic to notice a ball spawning underneath my feet in the first 30secs, because I’m too focused on how much time left I’ve got on potion, trinket procs, engineer tinker proc, Celestial Alignment, Incarnation and matching those to DOTs, Starsurge procs, and when CA runs out to start casting Wrath instead of Starfire for a few casts, that I end up not watching the small ball that barely poked out of my big Boomer butt. I love the first 15-30secs of a fight as a Moonkin, don’t get me wrong, but put a subtle change to the fight in that time period and I will either screw up that crucial early DPS pace or the fight mechanics. As another example, on Fallen Protectors we all had to make speech bubbles for when we were affected by Sha Sear. It’s going to be fun to purge all those WeakAuras and make new ones when WoD hits, that’s for sure.